Skip to content
The only time my sight ever became an issue was on holiday. As a lens wearer, it meant my eyes couldn’t come into contact with water. I was never able to do things like jump off boats or splash in the sea. As we began our travel preparations, I started to worry about how this would affect our trip; along with the burden of carrying around a years supply of contact lenses.

I had been desperately short-sighted for as long as I could remember. I was used to opening my eyes in the morning to a fuzzy blur of nothingness, and reaching blindly for my glasses. All through my teens I wore frames, but transitioned to contacts at the age of 16. I never had any problems with the daily ritual with putting in my lenses, and  hadn’t felt the need to consider laser eye surgery before travelling.

Travelling where there are no opticians

Our upcoming backpacking trip was about to take us to some very remote places, and everything would revolve around the water. We were planning to visit the worlds most-renowned diving and snorkelling spots, such as Raja Ampat, Komodo, North Sulawesi and the Philippines. Although we were not certified divers just yet, it would be silly not to explore the reefs here at depth. Contact lenses didn’t ever stop me from snorkelling, but I was always skeptical about the idea of diving in them. The thought of being 20m underwater and losing a lens was terrifying, particularly with my prescription.

Nick was also weighing up his options ahead of our journey. He didn’t have terrible eyesight but it was bad enough for him to wear glasses throughout the day. He was desperate to be free from frames, but due to a fear of touching his eyes he always struggled with lenses. Instead he wore glasses, and had to invest in expensive prescription sunglasses and a prescription mask for snorkelling.

But my main concern for our trip was not necessarily the diving and watersports, it was more the thought of running out of lenses and solution, or worse, one of us breaking a pair of glasses whilst on the road. We didn’t have a set time for how long we’d be in each location, and were acutely aware that replacing these items in certain places could be near impossible.

Another consideration was the precious space all of this gear would take up in our backpacks. We were looking at being away for 6 months minimum, so that would mean preparing a heavy supply of lenses and bottles of solution, along with combersome glasses cases. With space and weight already reaching its limit, I was very worried about how all of this was going to work out.

Neither of us had seriously considered laser surgery until now.

A friend from work had a contact at the London Vision Clinic on Harley Street. A number of my colleagues already had laser surgery with them, and raved about the results! We were starting to think that this could solve our problems, but there was a lot to think about.

Having the procedure before travelling was a huge investment. We’d already been ramping back on spending. I had given my notice in to quit my job and with only 6 months away from departure, it meant there would be no real time to claw back any money.

Aside from that, we were both pretty anxious about the procedure itself. I don’t have a problem touching my eyes, but the idea of a scalpel coming into contact with my pupil was stomach churning. I was also worried about how much time I might need to take off from work. Nick on the other hand would have to face up to his ultimate fear…the eyeball clamp! But overall it seemed like the ideal solution if we could go through with it.

After weighing up all the pros and cons we decided to go for it! Yes, it was going to put a bit more financial strain on our situation, but it would save us so much hassle and money in the long-run. It also meant I had no excuses for learning to dive now!

Firstly, we had an appointment to determine whether or not we were suitable for the surgery.  Our eyes were tested using multiple technologies, none of which were painful. After further examining, we were both excited to find that we were eligible candidates for laser eye surgery.

Our care consultant Kate worked tirelessly with the surgeons diaries to try and fit in our treatment before travelling. We would be cutting it fine, but it was possible. Nick was deemed a ‘perfect candidate’ therefore he would be having the more common lasik procedure. I had a slightly more complex case due to my very high prescription -astigmatism and larger than average pupils.  Therefore my surgeon, Professor Dan Reinstein, advised me to have a procedure called SMILE keyhole.

Professor Dan Reinstein is one of a small group of specialists who pioneered and continue to refine the techniques and technology of laser eye surgery. As I was an interesting case, he asked if I wouldn’t mind having some extra tests on a new machine he was developing. This involved putting my eyes into a very strange suction hole scanner that filled with water, which was likened to an ultrasound for the eye.

It was an interesting experience, and I really didn’t mind being a bit of a guinea pig since the clinic had gone above and beyond to work around our schedules ahead of the trip.

In order to deal with his nerves, Nick was prescribed Valium from our GP for the procedure. We checked this with the surgery first and they gave us the ok. Turns out it’s a pretty common request. This really helped his nerves on the big day.

The London Vision Clinic have succeeded in creating a calm and comfortable environment for their patients. There is even an opportunity to have a back massage with their in-house masseuse before surgery, which I opted for, and it was wonderful.  Afterwhich we were accompanied to the preparation area, before heading into theatre – and a changed life!

Before the surgery begins, the nurse literally ‘tucks you in’ to the operating bed with a blanket, and hands you a teddy to hold onto for security. I’m surprised she doesn’t give you a little kiss on the forehead before they fire up the lasers! During the procedure there is really no pain at all, although at times you do feel some pressure applied to the eyes, which is slightly uncomfortable for a few seconds. For the most part, you simply look straight into a flashing light. The surgery itself takes around 3 minutes per eye, which is unbelievable.

You are not allowed on public transport post-surgery, as your sight is very blurry and your eyes must be protected from dust or particles. It is recommended that a buddy collects you from the clinic to escort you home. When I met Nick from the clinic post-op, I found him sitting calmly in reception with his sunglasses on. Your eyes must be kept away from direct light for a couple of days.

We were given an alarm clock which goes off every 15 minutes, at which time you must administer two different types of antiseptic and hydrating drops for the first two days. At night we had to tape plastic ‘goggles’ over our eyes to protect them from any absent-minded rubbing during sleep.

Post-surgery we were advised to avoid long periods of screen use. Nick took it easy on the work front for a while, but as my job involved less on the computer I jumped back in two days later. There was minimal disruption to our daily routine and we were both quickly back to our normal lives.

We cannot stress enough how easy and painless the entire process was.

Ready to see the world in all of its beauty

Opening our eyes the following morning after surgery felt like a miracle. We had a check up that day and were thrilled to discover that we had already achieved better than 20/20 vision. I still occasionally find myself reaching for my glasses in the morning, but then I open my eyes and remember.

One year on from surgery we are still travelling, and almost taking our eyes for granted. Occasionally we might get slightly dry eyes, normally from prolonged exposure to air conditioning, flying and screen use. But not having to worry about the hassle of glasses and contacts more than makes up for this!

Having laser eye surgery before travelling is probably the best decision we have ever made (apart from travelling itself!) Was it money well spent? Without a doubt. Our only regret is not doing it sooner. If you are considering having Laser eye surgery before travelling, we highly recommend the London Vision Clinic. The entire team were absolutely fantastic, and continue to support us even whilst we are still on our travels.

Are you a watersports fanatic, diver or backpacker with glasses or contacts? How do you manage your eyesight on the road? We’d love to hear your thoughts! 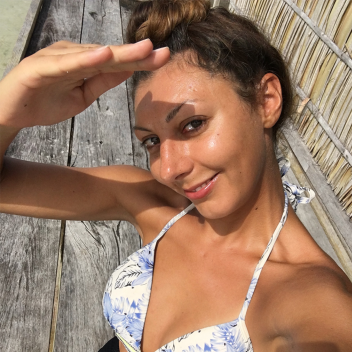 View all posts by Claire

We’re Claire & Nick, the co-founders of Remote + Afloat and Citrus Reef. Our combined passion for travel, snorkeling and diving has taken us on a unique journey to some of the worlds richest coral reefs and remote islands. Here we share stories and travel tips to help you plan your own adventure. Learn more.